Posted at 21:01h in Announcements, Books by belasikadmin 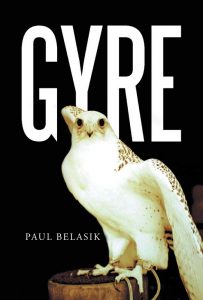 Robert McPherson, a practicing psychiatrist and falconer in the vast and wild landscape of Cross Keys, Montana, has recently begun work with a new patient. Sean is a young boy from a military family who suffers from debilitating panic attacks and night terrors. He cannot be left alone, and his family hasn’t been able to find a therapist who can unravel Sean’s problems. As Robert tries to help Sean, his mysterious behaviors and unnatural knowledge of eagles and horses lead Robert toward a very unconventional treatment. Robert’s wife Maggie, an academic psychiatrist with strong ties to the east coast, is deeply skeptical of Robert’s work with Sean.

With a backdrop of mountains and falconry, Robert coaxes Sean toward recovery. Robert’s longtime friend and expert falconer, Sam, hunts alongside Robert. Together they practice the majestic and ancient art of falconry as Robert navigates unknown territory in his work and marriage.
Order Gyre here.

New Paperback Edition of A Search for Collection