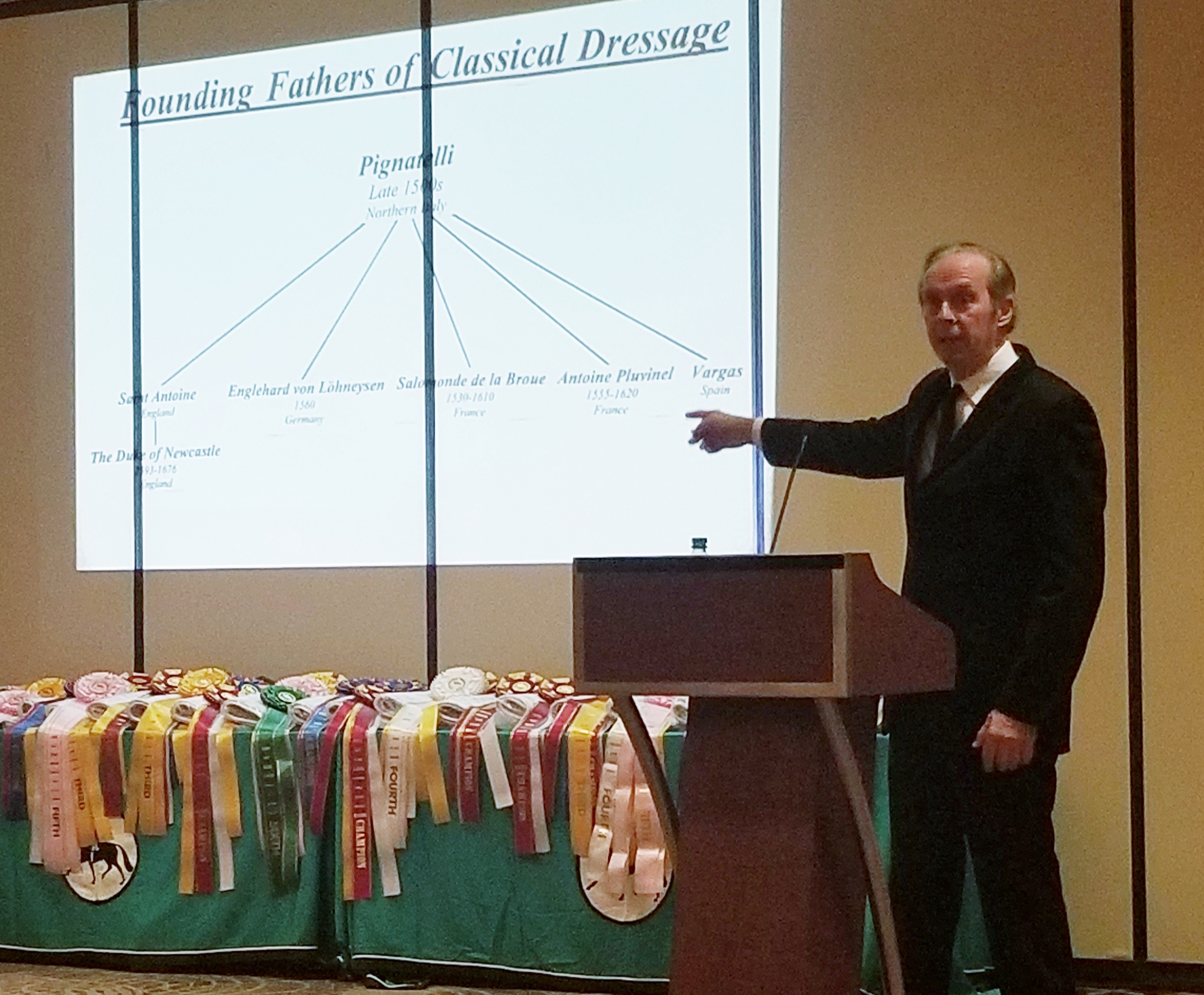 Posted at 23:50h in Lectures, Wisdom by belasikadmin

Lecture given on January 11, 2020 for Potomac Valley Dressage Association 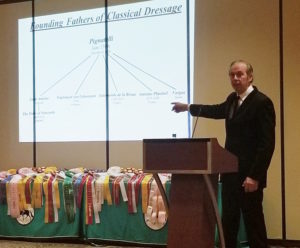 Thank you – I know there is a lot going on tonight, so I will try to keep my remarks brief. I want to give my advance congratulations to all those who will receive awards tonight. A person receives an award, but you often don’t know the backstory, the hardships they had to endure, the good or bad luck. I have been in this business for awhile and I know there are some great stories out there behind the awards: this horse almost cost me my marriage; I drove a used Ford Taurus for four years to afford my trailer to haul my horse to the shows; this horse has been trying to kill himself since the day I paid for him. But you have succeeded! So, it is our tradition to give very expensive pieces of small cloth or inexpensive pieces of non-precious metals as symbols of approval, which either affirms that you are/were not crazy in your endeavor, or in a very zen way it confirms that you are absolutely crazy to be involved in a gathering like this one tonight. In all seriousness, congratulations to all the recipients. I am one of the tribe. Tonight, I want to talk a little about volunteerism and then I want to talk a little about education.

A couple of months ago, I was giving a clinic in a remote area. The organizer of the clinic had an unusual request. One of the participants for some reason could not ride, but what they wondered was if they could they pay for the session but instead of riding, could ask me some questions that they had.  My first thought was that I am not a psychiatrist, but if they were questions about horses and riding, that would seem ok. The facility had a very nice viewing area, so I agreed as long as the audience could listen. The rider agreed.

There were a couple of important things that came up and in the end, I’m not sure who got more out of the session. The first thing that struck me was how alone this person felt in their quest to understand dressage. A few weeks ago, I was listening to a TED talk with Rachel Orsman. She was talking about loneliness, social isolation, and lack of community as being major contributors to addictions. She went on to explain the bio-chemical physiological nourishment people get from social interactions. I saw another figure where ½ of all Americans report feelings of isolation or being left out.

I kept trying to encourage this person to get involved with other horse people. If there were no groups, start one. I found myself giving examples of my own experiences in volunteerism.

As a young professional, I started my career in Chadd’s Ford, PA. I was lucky enough to meet the late Damaris Jenks, who helped my wife at the time and myself start a riding stable. I was building cross-country fences, stewarding at shows, competing, but my main interest was education and I had convinced the local community college to let me run a course on horsemanship, which I was doing. One day, one of the officers of the DVCTA, with is a sister organization to  PVDA, VADA, etc., said ‘if you have an interest in education, why don’t you become chairman of our education committee, design some interesting programs for all members, give me some kind of idea of the cost, and I’ll get you the money.’ She very cleverly avoided the fact until I was voted in during a board meeting that I was the automatically the chairman because there were no other members on the education committee! I was free to boss myself around until the others came home.

One of the beauties of volunteering is it is good for your ego and can help you if you want to raise your self-esteem, because basically if you show up and do even a mediocre job, you are going to get promoted to something that requires more time. This is how I found myself a couple of years later to be President of the DVCTA, an organization that was responsible for putting on two international shows per year: a CDI in Dressage at Devon and a CCI, the Chesterland 3 day event. I met amazing people. You had to be able to conduct a monthly board meeting of 13 powerful people and jump in at a breeding show and be a ring steward if that is what was needed. I wanted this young person to get involved, experience this kind of the sense of community, good and bad. So, tonight I want to encourage all people but especially younger people to get involved. You are seriously needed and would be appreciated and shortly promoted.

As my talk with this person went on, it brought up another side of our organizations, which was a darker side. The main reason I got involved in the politics was, as I said, because I was interested in education. When I was on the education committee, we did some interesting things. For example, we started a lecture series. I convinced some interesting people to come for an evening and give a presentation and then I kind of MC’d a question and answer session with the audience. I begged the people to come and present for a nominal fee, which they all did because they knew it was about education.  We got the hotel where we had our meetings to give us at least a cut rate on a nice room for the guest and for a conference room. We had refreshments and I think it was almost free to members, and a regular admission charge to nonmembers. We had people like Dr. Doug Leach, who was a mentor to Dr. Hilary Clayton, a friend who is now a well known expert on equine biomechanics. We had Deitrich Von Hopfgarten, who trained several Olympians and had a degree in physical education from Germany. We had Jean Claude Racinet, to talk about the French tradition in dressage. Chuck Grant spoke, a founding father of the American Dressage scene and one of the only non-military people involved from the very beginning. Henri Van Shaik spoke, himself an Olympic Silver medalist but an outspoken critic of much of competitive dressage.

I thought this was very important, not only because of the need to educate, but also to give something back to the volunteers besides a work schedule. The lectures were inexpensive, they were fun, they were well-attended, members liked them. At that time, I think the DVCTA had around 500+ members and between 2 big international shows we used every one. I felt the horse shows were exhausting our volunteers. Most of our members couldn’t even qualify for the elite shows we were putting on. Where was the education? Unfortunately, I feel we are failing in the area of education.

If you go to the mission statement of the United States Dressage Federation, the very first sentence talks about education. If you go to the bylaws, again the first demand is for education. There is language about promoting better riding, there is even mention of classical dressage. There is nothing that says the purpose is to promote competition. However, if you go to the current educational section of the USDF’s website, there are a multitude of categories, opportunities, but if you look closely, they are almost all about competition – how to be a technical delegate, how to go to 4 and 5 year old classes, a learner judges program. There are some of Dr. Hilary Clayton’s work, a one woman show on biomechanics. But, for a long time these educational programs have become a rubber stamp for the German competitive system. In the USDF magazine there are articles on the German training scale, learner judges are shown examples of German warmbloods to be ideals.  If you look to learn about the history of dressage, There is a scant mention which has been essentially cut and pasted from this book – The Official Instruction Handbook of the German National Equestrian Federation: The German Riding and Driving System Book 2: Advanced Techniques of Riding.

The young person I talked to had to pay me for a private tutorial with the thinnest synopsis of where her riding came from and what the fundamentals were, what makes one movement more correct than another. Who invented it and why. This information shouldn’t be hidden, it should be up front and easy to find. It should be a priority, as the mission statement and bylaws demand, but it isn’t. Now, what I don’t want is for someone to say, Paul is just ranting against competition. I am not saying at all. I have competed at CDI’s, coached at CCI’s and I have administered at both. I have run schooling shows and as I told you, taught a horsemanship course for a community college. I train horses and riders to compete in many countries. What I am saying is that education needs to go hand in hand with sport and art.  They are not mutually exclusive. We need to do a better job and we can do a better job. That’s why I came here tonight.

Thank you – I think we have time for a couple of short questions.**

**One audience member asked where she might find more information on the history of dressage. Paul recommended visiting the National Sporting Library in Middleburg, VA. However, we have also compiled this short list of historical books that may be of interest and are at least a good place to begin. They are specifically chosen for their historical perspective and importance:

Federico Grisone: The Rules of Riding – Edited and Translated by Elizabeth Mackenzie Tobey

A General System of Horsemanship by William Cavendish, Duke of Newcastle – Fascimile of the London Edition of 1743