29 Jan Musical Freestyle: Your Horse is Not a Large Drum

This is the second part of a two part blog. The first was about music in the daily existence of a dressage stable.

In 1984, Christopher Dean and Jayne Torvill were a pair of British ice dancers. They won a gold medal at the Olympics and were the highest scoring skaters of all time. Probably more importantly, by themselves they created a dance in sport that became a world sensation. It was a perfectly executed skating routine to one piece of music, Ravel’s “Bolero.” There were no sections of different musical pieces, nothing chopped together, just the dramatic, hypnotic building of “Bolero” for the duration of the performance. No one had seen anything like it, and people everywhere loved it!

It was around this time that the musical freestyle was being touted as a savior for “boring” dressage. Promoters of dressage, like promoters of all things, thought it would put dressage on the public’s map. I remember talking about it with my old friend and mentor, Dr. Henri van Shaik. He wasn’t too enthusiastic and thought it could turn dressage into a circus. 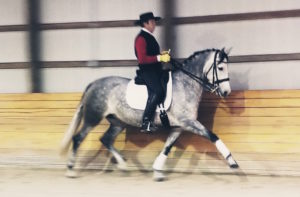 When we think of Torvell and Dean’s interpretation of music in their own discipline or craft, we also have the long historical example of ballet and the relationship between art or choreography and music. Here the music always helped tell the story of the dance; in some cases performances as complex as the Nutcracker Suite or some of Ballanchine’s very simple ballets. Dancers interpreted the music and music helped tell some kind of story. Dressage musical freestyles went in a different direction. For one thing, the choreography was quite limited, some would say strangled by the rules. Especially because there was also a severe limitation on time – only a matter of minutes.  I remember van Shaik was influenced by this part. He said if you have to check their competence, let them qualify at whatever level they are going to do a freestyle, which did end up being the rule. But, he argued that once riders have proven they can ride at that level, then leave them alone. Being a competition, the problem was always trying to make it easier to judge. With the time requirements and the movement requirements, there was little room to do anything but rearrange the patterns of the competitive tests so that it was not much different than riding the same kind of tests, just to music.

To me, a more insidious trend developed: matching the rhythm of the horse’s gaits to the beat or rhythm of the music. With the advent of technology like auto-tuning for singers, the music could be tampered with; imperceptibly sped up or slowed down so that the horse’s footfalls would match the music. The result was the horse and rider became part of the music, just another instrument of percussion, keeping time. There was little interpretation of the music, it was more a rider climbing on the back of a horse, and a horse climbing on the back of some emotional or gifted musicianship. There was no story apart from the music – it was just some accompaniment.

Besides revamping the rules that govern freestyles, I think that there are ways they could be improved. Riders should think about the composition. Don’t just go out and buy one from someone who doesn’t know you or your horse. It is at least a small chance in dressage to try to make some art, instead of just an athletic performance. I don’t think you should necessarily start with music you like. Maybe start with what you want to say. Maybe you are serious. You and your horse have practiced hard and are good at details. Even at a low level you could ride a shoulder-in off the wall and hold the bend and the line. Your music might reflect this precision.

Maybe you feel light-hearted and you want your freestyle to be fun for everyone. The music will be very important to keep the mood. To present something light-hearted and fun is very difficult. It is easy to come off as not caring or sloppy. It takes even more technique than playing it straight. I remember a training video for jumper riders by Franke Sloothaak, a Dutch rider who competed for Germany, where he rides examples of common mistakes. This only shows you how good he really was, that he had that kind of skill and control. When a freestyle can have an element of fun, audiences usually love it.

Maybe you have a beautiful horse. You have worked hard on your position. Many people have commented on how elegant you look. Maybe you want music to compliment that. You keep your choreography more flowing, turns, circles, changes of rein. It exaggerates the elegance.

Maybe you want to show how athletic your horse is, powerful and obedient. Your music is more demanding, you show lots of transitions, even full halts, lengthenings, shortenings, collection, etc. If you just match the music to this kind of ride, it might seem frantic and scattered. It could push people away. Remember, in good dressage the tempo remains constant even through changes of speed.

These of course are the clumsiest of suggestions. All I am saying is your horse is not a large drum and just because you love heavy metal it doesn’t make it necessarily the right fit for your freestyle performance. Set aside some time to think about these kinds of things. A good freestyle is not easy. For me, perhaps unlike van Shaik, the jury is still out. I need to see some riders show me it can be done.

Current Opening for Horse in Training