This is a two part blog. The first is about music in the daily existence of a dressage stable. The second will be about musical freestyles. 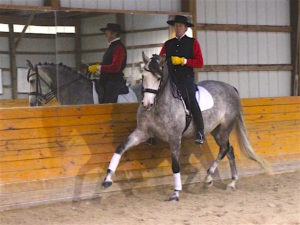 A great barn manager is like a great conductor. They hear everything. The clarinet is off key. The first clink of a loose shoe as a horse walks out of a stall. The second violin is late. One horse is rattling its empty water bucket. Like a conductor standing in the middle of a stage, a barn manager can be standing in the middle of the barn and notice that someone put too many saddle pads in the washing machine, and it is now wildly gyrating out of balance in the tack room. One of the horses is shaking off the bedding from lying down and rolling a second time. Two horses squeal in a far pasture on the farm. The pump is making a funny sound. Water is running somewhere.

When the barn is running well, it is a symphony. The constant attention to the smallest detail keeps things healthier, more efficient and economically successful. I want the interns to learn this from the experts. I don’t dislike music, but I want them to learn to understand a new music, and you can’t do this with headphones in your ears or with a barn radio drowning out the subtle but most important sounds of the farm. In learning this sound awareness, there are all the personal benefits of refining any awareness for the individual: better senses of observation, refined skills of attention.  When you work with animals that for the most part do not speak with words, it is often these sounds which will alert you about their well being. If you burn up the boss’s weed eater because you put the wrong fuel in it, in the end it is just a machine, but in caring for and ultimately training animals (in our case specialist horses) you are dealing with living things. Enhancing sound awareness pulls the individual out of the incessant egotistical mind loop our brains seem to want us to stay locked in.

I want the interns to try to learn to how to listen, not to everything, but to discriminate, to be an expert in your craft, to hear what is important. Lives will depend on it; this is not a hyperbole.

So, if you walk in my barn to apply for a job and it seems too quiet and boring, you might need to learn how to use the natural headphones on the sides of your head.

Years ago, I used to bribe my son to film some of my rides once a week. During those years, I often rode to music, even taught lessons to music. In the riding hall in the background were strains of Mozart, Beethoven, Bach. When I would sit down to review the video, (which by the way is best done in a darkened room by yourself with some good whiskey to limit the pain of enduring all the mistakes in your practice) I really wanted to concentrate on what I was seeing: what was wrong, how could I make it better. I often replayed the film, slowed it down and turned the sound off. (I did the same thing with all sales videos sent to me.) Almost by accident, over the hours and hours of doing this, I began to notice when I was riding to music that I almost always thought the performance was better than it actually was. What may seem obvious to you took me awhile to actually figure out; namely that the music was carrying along my self-perception. In the company of musicians who can play Mozart at concert level, record producing level, I felt drawn along. Now, for the bad news, at least for regular riders. Sorry, but you are not part of the orchestra whose musicians have probably out-practiced you by thousands of hours. Turn off the music during practice. Increase your attention.

As they say in all the drug ads that are required to list possible side effects: One of the possible side effects of riding this way can be increased irritation. You may become a little harsher with your self-criticism, and maybe a little more demanding of your horse. The good news is you won’t need to see your doctor. You should have done that before you took up dressage!