In an article recently published by the Royal Veterinary College, University of London, a question is framed in bold type: “Should we redefine equine lameness in the era of quantitative gait analysis?” The article begins, “An international team of researchers, including [some] from the Royal Veterinary College (RVC) in London, have strongly advised on the need to discriminate clearly between “asymmetry” and “lameness” when assessing a horse’s gait.” 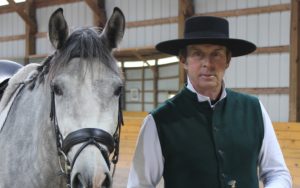 The gist of the article is that with the advent of computer technology, we have a much more sophisticated view of unevenness in horses, resulting in a ‘sliding scale,’ meaning that just because a horse is not symmetrical or even in its gaits on both sides it does not mean that it is lame and therefore unfit to perform. My biggest hope is that this advice will somehow filter down into the protocols of pre-purchase exams (PPEs). I cannot tell you how frustrating it has been over the years when myself and other professionals would have a nice horse for sale, often competing or performing with a show record and the process would go something like this: We would find a buyer and then have a PPE. Somewhere in this exam, the horse would be longed on a smallish circle on a hard surface such as concrete or blacktop. Then we might be asked to ride the horse but not use the reins, to simply circle again in both directions on a long rein in walk, trot and canter. The presumption was that a good rider might be able to somehow mask lameness. This in itself should have been a ripe question for study. As riders and trainers, we were all well aware that an ambidextrous horse was a very rare animal. Part of our work was to try to make horses more symmetrical. Especially in dressage, we have a list of historical exercises specifically aimed at addressing one-sidedness, crookedness, unevenness, lateral asymmetries, though it is also known that this work can take years. So, it was a miracle if a horse trotted on concrete in a small circle and looked identical in both directions. Asymmetries are common, but they were always called lameness and even given a score on a scale of 1-5. You can imagine the prospective buyer’s response. If you got to this step, it was now a costly series of radiographs to illuminate the cause of the lameness. The interpretations of what the x-rays might mean is another whole subject. Sticking to the point, once the diagnoses of lameness came up, you were off down the road of some pathology, and the customer’s car was pulling out the same driveway you just longed the horse on.

I can remember one particular case, many years ago. I had a really nice horse for sale that was bit asymmetrical when longed on the concrete. The young vet whom I did not know, pronounced it lame. This horse under saddle was perfectly even and was competing in eventing and doing very well. I was so upset to have this black mark put on my nice horse that I went into my house and brought out two large pads of paper. I asked the vet to draw a circle with her right hand on one of the pads and on the second identical pad, I asked her to draw a circle with the same pen with her other hand. We looked at the two circles, one nicely formed from the dominant hand; the other looked like a child had drawn it. I looked at her and said, “I think you may have a neurologic problem.” She got my point. I lost the sale. Hopefully, with this new science, younger professionals will have a little easier time selling good horses.

“Modern Study of Expertise” from “Dressage for No Country”